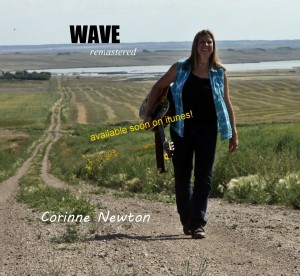 The recording industry is interesting, and a bit complicated – but I’m slowly catching on! I recorded Wave on a 4 track digi-studio. For those of you unfamiliar with this, my digi-studio has 4 tracks and a built in drum machine. So you basically record a guitar on 1 track, a vocal on another and maybe lead guitar on another. Mix them down onto the 4th track which leaves you with 3 empty tracks where you can add background vocals and maybe another instrument or vocal. You can record up to 7 different tracks this way. And this is how Wave was recorded. Worked well for me – that was 10 years ago and beyond. Listening to it now, however, I became quite critical. It was never professionally mastered and so I decided for my own peace of mind, to make it sound as good as it could (being recorded before I had a computer and recording software), I would take it to Jawbone Studios in Moose Jaw and have it remastered (the mastering process basically cleans it up and makes the songs consistent).  That was done this past week. I’ve ordered a batch of the new cd, now known as Wave remastered which includes a bonus acoustic track which will be included on the next cd. I hope to have “Wave remastered” available on itunes.  And come Feb, I hope to get back to to working on the new stuff! FYI…the ‘ol digi-studio is packed away – I now use Presonus Studio One software with my laptop.  And now you know….. 🙂

Check out the new song/video "I'm Tired, I'm Broke and I Just Don't Care. Just click the link below!

Share on FacebookShare on TwitterShare on Linked InShare by Email

When I was in my 20’s, I waitressed/bartended at

Morning coffee with the ladies #farmlife

Nice day for a ride #reallifereality

Looks like Tiny loves Marti as much as I do #catso

The music of Kenny Rogers is some of the earliest